Japan was admitted to UNESCO in 1951, five years before it became a member state of the United Nations. At the 6th UNESCO General Conference which admitted Japan, Japan's chief representative, Mr. Tamon Maeda, stated, “The spirit of UNESCO is the guiding principle for Japan, which is on the path of rebuilding itself as a peace-loving and democratic state.”

Japan's admission to UNESCO, the only pipeline between the country and the international community before signing of the San Francisco Peace Treaty, had its roots in the spontaneous rise of non-governmental UNESCO activities in the country soon after the war.

At that time there were already over 100 “UNESCO Co-operative Associations” (now UNESCO Associations) active throughout the country, as well as nearly 100 UNESCO Clubs at high schools and universities.

This non-governmental UNESCO movement gained the attention of UNESCO Headquarters and major UNESCO members, who judged that though Japan was one of the countries which provoked World War II, the Japanese themselves were a peace-loving people. The non-governmental UNESCO movement which first started in Japan has now spread to 3,500 UNESCO clubs in more than 70 nations throughout the world. 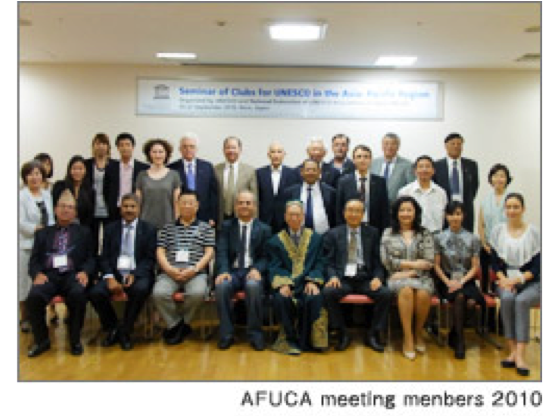 In order to achieve the objective, the Federation carries out exchange of information or personnel, and organization of study groups, conferences, workshops and exhibitions.

After the formation of AFUCA, NFUAJ played a leading role in establishing a worldwide organization of non-governmental UNESCO associations. These efforts bore fruit in July 1981, when representatives of non-governmental UNESCO organizations from 70 nations met at UNESCO Headquarters in Paris and founded the World Federation of UNESCO Clubs, Centres and Associations (WFUCA).

In 1987, WFUCA was recognized as a Category A consultative organization (NGO), and now has Formal Associate Relations to UNESCO. The WFUCA secretariat is located within UNESCO Headquarters.

To promote activities among the Japanese people based on international solidarity and cooperation in the spirit of the UNESCO Constitution.